Nitrogen Generators in the Laboratory 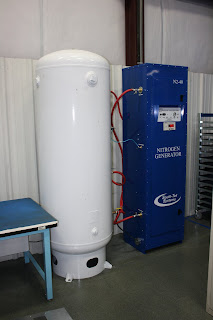 The necessity of constantly maintaining the atmosphere in these types of equipment requires large amounts of Nitrogen, which is easily obtained because of its large concentration in air. Providing it via tanks and bottles of liquid Nitrogen can be problematic, however, because of hazardous storage requirements, delivery delays, and run outs. The tanks and bottles are also heavy, making them difficult for lab personnel to handle.

A PSA Nitrogen Generator can provide the needed supplies of gas at purities up to 99.9995%, and at drastically reduced cost. In addition, the generator itself can be installed in a basement or corner of a room, with feed lines running to the equipment, even if it is located on multiple floors.

South-Tek Systems can engineer a Nitrogen Generator specifically for your laboratory application. Visit our website for pricing and additional information.

Nitrogen is the perfect inert gas for atmosphere blanketing because it completely removes oxygen that can lead to fire, explosion or deterioration of materials during production, storage and transportation.

Nitrogen blanketing is used by chemical processes, biofuel manufacturing, and power plants. Ocean going freighters blanket cargo areas to retard oxidization of ore and other materials over long voyages, and blanketing is critical to many industries such as food and oil production to prevent spoilage, fire and explosions while storing and transporting their goods.

PSA Nitrogen Generators reliably and safely provide the purity and flow necessary to maintain the proper inert atmosphere for blanketing applications. Switching from a gas supplier to making Nitrogen on site provides these industries with as much Nitrogen as they need, when and where they need it, and saves considerable money for their bottom line.

At South-Tek Systems, designing and manufacturing Nitrogen Generators is our specialty. Each Nitrogen Generator is custom engineered for the unique application, location and requirements of each of our clients. For more information, visit our website or call 888-526-6284.

PSA Nitrogen Generator - Is It Adsorption or Absorption?

PSA Nitrogen Generators are the sturdy work horses of Nitrogen generation. They separate Nitrogen from the air through straightforward and reliable technology and last for 20 years or more with little maintenance. So what exactly does the PSA stand for?

"Presssure Swing" (the "PS") refers to the pressurization of the two vessels used for separation, which are typically filled with carbon. As the first one fills with air under pressure, the carbon material attracts all of the smaller oxygen and trace molecules, allowing the larger Nitrogen molecules to pass through the carbon and into a storage tank. As the first vessel is saturated, it starts to release pressure and vent off the oxygen, while at the same time the second vessel is starting the whole process over again. Hence the "swing" of pressure from vessel to vessel, resulting in a continuous process of Nitrogen production.

So what about the "A"? At South-Tek, we think the more accurate term for what occurs during this "swing" of pressure is Adsorption, and we are sticking with it. But it is just as common to hear the process referred to as "Pressure Swing Absorption."

To "absorb" is defined as "to soak up; to take up or receive by chemical action."

The definition of "adsorb" is to "accumulate (liquids or gases) on the surface; to gather (a gas, liquid, or dissolved substance) on a surface in a condensed layer."

It may seem like a picky distinction, but since the carbon under pressure holds molecules of certain gases on it's surface, then releases them when not pressurized, we find that adsorb more accurately describes the separation process. The carbon attracts the molecules of all gases in the air except Nitrogen, which is too big to "fit" on its surface. The carbon doesn't really "absorb" or soak up those molecules, it just holds onto them for a while until just the Nitrogen can be collected.

Regardless of the terminology, the end result is the same. Nitrogen gas is generated from the air cheaply, safely, and reliably, while eliminating the hassles of gas deliveries, storage of bottles and tanks, and keeping track of gas contracts.

Discover how a PSA Nitrogen Generator can simplify your production line by contacting South-Tek Systems today.