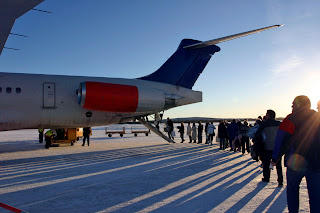 Fuel tanks are closed or sealed pressure vessels carrying highly flammable gases for the purposes of providing fuel to a source such as an aircraft.  Such fuel tanks run a high risk of fire or explosion when the following three factors are in play:
Eliminating one of these three factors prevents the potential for fire or explosion.  Since a fuel tank carries fuel - one of the three vital factors - that one cannot be eliminated.  If it is not possible to eliminate the heat or ignition source, then it is necessary to eliminate or significantly reduce the presence of Oxygen in the tank.

The process of reducing Oxygen from the fuel tank is called inerting.  One way to accomplish an inert atmosphere is to pump Nitrogen gas into the tank in order to displace the Oxygen and reduce its content to a level below the threshold required for combustion.  Nitrogen is a cool, dry, inert gas that acts as a safe replacement for Oxygen within a pressure vessel such as a fuel tank.

A Nitrogen Generator provides a great advantage when used for inerting fuel tanks.  N2 Generators supply a steady stream of Nitrogen gas on-demand and on-site in a safe and reliable system.  In comparison to a high pressure Nitrogen gas cylinder, there are a number of advantages including:
South-Tek Systems specializes in designing and manufacturing Nitrogen Generators used in a wide range of applications, including fuel tank inerting.  South-Tek employs a Flow Verification Program to ensure that each client is appropriately suited with the most efficient Nitrogen Generator for their particular application.

Contact South-Tek Systems today to inquire about the use of a Nitrogen Generator for inerting your fuel tank today: 888-526-6284