South-Tek Systems, a company dedicated to designing and manufacturing Nitrogen Generators, has been awarded defense contracts with the U.S. military to supply their Nitrogen Generator products to different sectors of the military, including the Marine Corps.

South-Tek Systems is featured in a Wilmington, N.C. Star-News report about local southeastern North Carolina businesses who are benefiting from defense contracts with the U.S. military.  The article states that approximately 325 Wilmington area businesses hold defense contracts to do business with the military and "that the word only recently has gotten out about the enormous opportunities to make money from the U.S. government."

Charles Metzler, industrial and military sales manager for South-Tek Systems, was quoted in the article regarding his experience in getting qualified to sell to the U.S. government and then actually securing defense contracts.  South-Tek makes a big and deliberate push to promote their Nitrogen Generators to the military bases and has had success in getting their products into the hands of the Marine Corps.

Nitrogen Generators produce Nitrogen gas on-site and on-demand using a simple technology that separates and captures the N2 gas present in the air around us.  They are meant to replace delivery of hundreds of high pressure cylinders of the gas and are more efficient, reliable, and cost effective.  Nitrogen is "the most widely used gas on the market," says Metzler, and Nitrogen Generators make it easier to produce high purity N2 gas as-needed.

South-Tek Systems manufactures a range of Nitrogen Generators from the compact, portable N2 GEN Series, to the skid mounted S Series, to the high pressure HP Series.  Their generators can accommodate a wide variety of applications and can be used for the military both in the field and on the base.

For more information on South-Tek Systems and Nitrogen Generator uses in the military, please see:

Companies that specialize in food packaging require a solution for keeping the food fresh, preserving the taste and texture, and ensuring safe delivery throughout its journey from the warehouse to the shelf to the consumer.

An ideal solution to solve each of these issues is Nitrogen gas.  Using Nitrogen to blanket food packaging helps to eliminate the presence of oxygen.  Oxygen reacts with the food causing oxidation and affecting the quality, taste, texture, and safety of the product.  Food packaging companies use Nitrogen for modified atmosphere blanketing (MAP) or controlled atmosphere (CA) to eliminate oxygen that might cause bacteria or virus growth and keep food safe and preserved for consumption later in its shelf life.

Because large quantities of Nitrogen are required for atmosphere blanketing with food packaging, the most ideal method for administering the gas is with a Nitrogen Generator.  Nitrogen Generators help companies save money and work efficiently because they produce Nitrogen literally from thin air and will not run out of the gas supply.  Avoid costly run-outs, switching tanks, N2 gas company contracts, high pressure cylinder delivery, handling and storage all with a Nitrogen Generator.  Depending on the size and model Nitrogen Generator a company needs, they may see a return on investment (ROI) in 18-24 months, plus they eliminate the hassle of dealing with the gas company, storing extra cylinders, and potentially running out of gas at a critical point.

South-Tek Systems is a designer and manufacturer of Nitrogen Generators for a wide range of industries, including the food packaging industry.  Using the Flow Verification Program, they are able to suit you up with the best sized N2 Generator for your specific needs.

Contact South-Tek Systems today to learn more about how a Nitrogen Generator can save money, improve efficiency, and preserve quality: 888-526-6284.

The process of making wine involves many steps, from growing the grapes to picking them and crushing them to get the juice or "must."  The must is then pressed, the juices extracted and poured into a vat. The next step involves settling - letting the juices settle so that the grape sediment separates and drops to the bottom of the vat.  The juices are then divided up and transferred among different vats where they will settle even more.  The next step is fermentation where yeast is added to convert the natural sugars into alcohol.  Finally, the wine is ready to be bottled.

Nitrogen Use During Wine Bottling 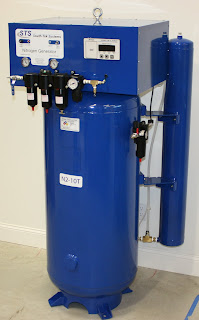 Nitrogen gas is a clean, dry, inert gas that is safe to handle and easily accessed with a Nitrogen Generator.  Nitrogen comprises 79% of the air we breathe and a Generator uses a simple technology to mechanically separate the Nitrogen molecules from the other molecules found in the air, isolating the Nitrogen gas in a storage tank until needed.

Nitrogen is used in the bottling phase of wine making in a couple of different ways:
Get The Freshest, Best Tasting Wine By Using Nitrogen During Bottling

Use of Nitrogen during wine bottling has many advantages, especially when produced using a Nitrogen Generator as an alternative to N2 gas cylinders.  The high pressure cylinders need to be handled with extreme caution and require that you rely on a gas company for refilling.  You also run the risk of running out of N2 gas with a cylinder.  A Nitrogen Generator is safe, reliable, won't run out of gas, produces N2 on an as-needed basis, and is even more cost effective than using cylinders.  You can ensure that your wine will not risk oxidation during bottling with a  Nitrogen Generator.

You may be surprised to note that Nitrogen gas can be used during many phases of wine making, not just bottling.  Nitrogen is used throughout the process of wine making, particularly during the settling phase, to eliminate the presence of oxygen and to protect against possible oxidation.  Nitrogen can also be used during the wine drinking phase to preserve open bottles of wine for a longer period of time by purging them of oxygen (see: WineLast™ Nitrogen Purging System, WineLast™ - Keep Your Wine Fresh & Tasting Great Longer)

More Resources on Nitrogen in the Wine Making Industry: