Nitrogen for the Beverage Industry

Nitrogen is a useful and important gas for the beverage industry - from breweries to winemakers to restaurants and bars.  N2 gas can be applied in a number of ways to help preserve the product, streamline the production process, eliminate the threat of oxidation which could alter the taste and freshness of the beverage, or simply help deliver the best possible drink to a consumer.

How is Nitrogen Used in the Beverage Industry?

Nitrogen gas is a safe, clean, dry, inert gas that is typically used for purging but can also be used for preservation or can be blended with CO2 for the optimal level of carbonation.

We've discussed the value of Nitrogen in the Winemaking process in previous posts:
Whether it's sparging, blanketing, or flushing, Nitrogen can be used in wine transfer, bottling, and topping.  It's also used with the end product in terms of preserving an open bottle of wine and preventing oxidation.  South-Tek Systems manufactures the WineLast™ Wine Bottle Nitrogen Purging System ideal for restaurants and bars serving wine by the glass who need to maintain freshness in the open bottles.

Breweries use Nitrogen to control oxidation and maintain freshness throughout the brewing process and in the bottling and canning stages.

Restaurants, pubs, and bars use Nitrogen mixed with CO2 to produce the optimal beer gas blend for draft beer recommended by brewers.  This mixed beer gas pushes the beverage from the keg to the taps to produce a ideally carbonated draft pour.  This process eliminates over-foaming, allowing estbalishment owners to reap more profits from their draft beer service in addition to serving high quality beverages from the first glass from the keg to the last.

To learn more about how a Nitrogen Generator can benefit your brewery, vineyard, winery, restaurant, or bar, please contact South-Tek Systems today: 888-526-6284. 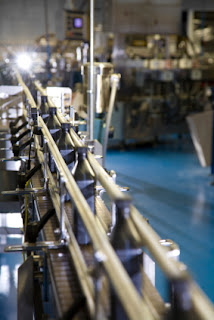 There are a vast number of industries who require careful and precise packaging for their products.  The packaging system they use affects the integrity and overall quality of the product.  Packaging may prevent breakage or crushing of the product or it may ensure a sterile environment to maintain optimum safety.

Some industries that require careful packaging of their products include:

A Nitrogen (N2) Purge for packaging is a safe, reliable, and cost efficient solution to protecting packaged goods.  Nitrogen gas can protect against damage, breakage, or crushing as well as add strength to the container.  Nitrogen can also increase the shelf life of packaged goods, maintain a sterile environment, and preserve the flavor and color of your product. (See: Nitrogen Use with Medical Device Packaging and Save Money, Preserve Quality Using Nitrogen for Food Packaging.)

How Does Nitrogen Packaging Protect Your Product?

Nitrogen is a clean, dry, inert gas that can be applied to an environment to take the place of oxygen.  Oxygen can be a factor in corrosion, combustion, decay, bacteria growth and other processes that will undermine the quality and integrity of a product.  By replacing oxygen using a Nitrogen purge within a sealed package, the packaged product will last longer, stay clean and protected, and will have preserved taste, color, flavor, and texture.

A Nitrogen Generator can be used to administer a Nitrogen purge for packaging in a more efficient and cost-saving manner compared to using high pressure N2 cylinders.  South-Tek Systems engineers and manufactures Nitrogen Generators for use with any kind of packaging needs - food, medical, electronic, and more.


Contact South-Tek Systems to learn how a Nitrogen Generator can benefit your business today: 888-526-6284.

Modified Air Packaging - or MAP - is a process used primarily in the food packaging industry to keep food fresh, preserve taste and texture, and ensure safe delivery and storage.

Why Do We Need Modified Air Packaging?

The biggest threat to food packaging and preservation is oxygen.  Oxygen reacts with the food causing oxidation and affecting the quality, taste, texture, and safety of the product. If oxygen can be safely reduced or eliminated within the packaging during transportation and storage (without adding any other harmful elements to achieve this), then the food will be good as new when it reaches it's destination.

One of the best ways to reduce the level of oxygen within food packaging is to use Modified Atmosphere Packaging which is to replace the oxygen with an inert gas, generally Nitrogen.  This method increases the shelf life of processed foods without the need for vacuum packaging, preservatives, or freezing that might ultimately affect the end quality of the food.

Using a Nitrogen Generator for the Modified Air Packaging process is an efficient and economical way to apply N2 gas.  A Nitrogen Generator produces high purity N2 gas on-site and on-demand without risk of running out and without the need for handling and storing extra high pressure N2 gas cylinders.  Nitrogen Generators use a simple PSA Generator or Membrane Generator Technology to separate and capture the N2 molecules directly from the air around us.

South-Tek Systems is a leading designer and engineer of Nitrogen Generators.  Using their unique Flow Verification Program, clients are fitted with the most appropriate sized N2 Generator for their specific application, providing efficient operation and confidence in getting the job done right.

Contact South-Tek Systems today to see how a Nitrogen Generator can benefit your food packaging business: 888-526-6284.

Nitrogen Purging with a Nitrogen Generator 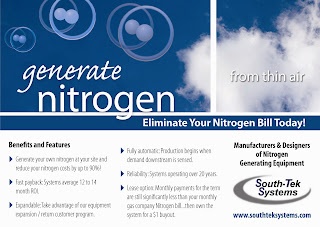 Nitrogen gas is often used for purging, a process that is utilized in a wide range of industries - from Gas & Oil to Winemaking and Food Packaging.

Nitrogen gas is a clean, dry, inert gas that makes up 79% of the air we breathe.  A Nitrogen Generator effectively separates and isolates the N2 molecules from the air, allowing it to be applied to an atmosphere that requires little to no oxygen for safety or preservation purposes.

In certain situations, Oxygen can be a highly dangerous presence, providing a vital element for combustion or corrosion.  In order to displace Oxygen and eliminate these threats, a high volume of Nitrogen gas is pumped into an atmosphere, vessel or closed system of piping with a continuous, uninterrupted flow.

Situations where combustion is a threat include aircraft fuel tanks, chemical processing, and oil and gas wells.

Situations where corrosion is a threat include a power plant boiler, HRSG layup, and fire protection systems.

Nitrogen Purging for Safety and Quality

Nitrogen purging affects not only the safety of an atmosphere, but also the quality of the overall system or final product.  As mentioned earlier, N2 gas is applied to scenarios where combustion or corrosion can undermine the safety and performance of a system or process.

But Nitrogen purging is also used to ensure the quality of a product, as in Modified Atmosphere Packaging (MAP) used with food packaging.  MAP is used to minimize the Oxygen within packaging to prevent spoilage and preserve properties such as aroma, flavor and texture of the packaged foods.

Nitrogen purging is also used with Medical Device Packaging to maintain sterility, freshness, and shelf life in an effort to preserve cleanliness and get the most accurate test results possible.

Economical and Effective N2 Purging with a Nitrogen Generator

Since N2 purging requires a continuous and uninterrupted flow of N2 gas, a Nitrogen Generator is the most economical and effective source of N2 available.  Where high pressure N2 cylinders need to be switched out with stored extras to maintain a flow - always with the threat of running out during peak use - a Nitrogen Generator supplies a steady source of high purity N2 gas on-demand at any given time.